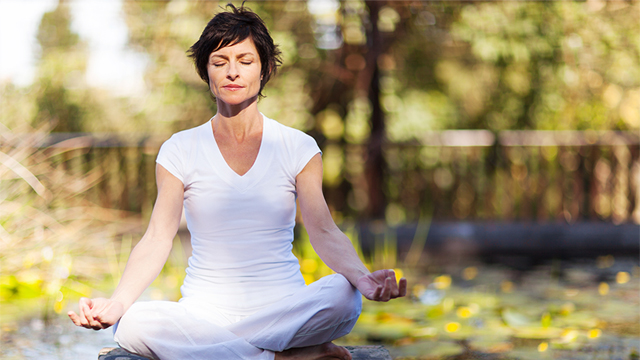 Chances are that at some point in your life, you’ve found yourself struggling with depression or anxiety or both. If you’re taking medication, you’re not alone. According to the Centers for Disease Control, antidepressant use is on the rise and higher among women than men in every age group. Use increases with age, in both men and women, with nearly a quarter of women aged 60 and over using these medications.

Of course, everyone’s situation is unique, and any decision about medication should be discussed with your doctor or mental health professional. But if you have mild to moderate anxiety or depression, there may be effective drug-free alternatives that can better serve your overall health and well-being.

The truth is, we don’t get depressed or anxious in a vacuum. For most people, stress is a major causal factor. The good news is, research shows that mindfulness practices can be effective methods for dealing with the stress that leads to anxiety and depression. Here are some things to consider if you’re trying to decide which approach is best for you.

Is Chemical Imbalance a Myth?

Consumer advertising campaigns for antidepressants often claim that depression is the result of a chemical imbalance in the brain. It may surprise you to learn that this assertion is not in line with current scientific thinking.

Since then, scientists have been unable to achieve consistent findings to either prove or disprove the theory. Methodologies of studies along with their results have been problematic. However, scientists did find that depleted serotonin levels didn’t always cause depression and that increasing brain serotonin through large doses of L-tryptophan did not relieve it.

Recent neuroscience research has also failed to confirm the chemical imbalance theory. The truth is, there is no established ideal level of serotonin in the brain or a method for measuring brain chemistry at a molecular level. Some researchers posit that the chemical imbalance claim works only through backwards reasoning, a lot like saying that because aspirin relieves headaches, headaches must be caused by an aspirin deficiency in the brain.

The effectiveness of antidepressants overall has recently been called into question by researchers like Irving Kirsh, the Associate Director of the Program in Placebo Studies and the Therapeutic Relationship at the Harvard Medical School.

Using the Freedom of Information act, Kirsh and his colleagues gained access to all of the clinical trials of antidepressants submitted to the FDA for approval. By the end of his extensive review of the data, Kirsh makes this claim: “most (if not all) of the benefits of antidepressants in the treatment of depression and anxiety are due to the placebo response…”

While some studies suggest SSRIs are more effective than a placebo, Kirsh attributes this to a failure of the double-blind system by both patients and clinicians. That is, even though neither party is supposed to know who gets a placebo and who gets the real thing, the side effects of getting the real drug generally give it away.

Studies in which patients and doctors were asked to determine who received a placebo and who received an active antidepressant showed consistently accurate judgments. In one study, 87% of doctors and 78% of patients guessed correctly. For those given placebos, it was more around the half-way mark, which is statistically more consistent with random guessing.

While Kirsh acknowledges that the placebo effect can be a true benefit, this needs to be weighed against the potential risks of antidepression medications, which can include suicidal or violent behavior, strokes, seizures, sexual dysfunction, and so on. He points out that there are many less risky treatments that have been proven to be just as effective, from psychotherapy, physical exercise, acupuncture and homeopathy, to mindfulness practices like meditation, tai chi, qigong, and yoga. In fact, these treatments are shown to be even more effective than medication in the long term.

Our understanding of the human brain is still somewhat limited. The functions are complex and brain circuitry can change with experiences over time. While this circuitry can also become more fixed, such as when anxiety or depression continue for long periods of time, the brain’s plasticity makes change in thoughts and behavior possible in many cases.

During uncertain times, we tend to experience our circumstances with an undercurrent of powerlessness. Anxiety often results when our flight-or-fight response is constantly being triggered, and we become stuck in a loop of trying to prepare for all the worst-case scenarios our brains serve up. Depression may be the result if we decide that our situation is hopeless and become despairing.

I find it helpful to think of the mechanics of mindfulness like this: when we become aware that we are reacting emotionally, this activates the prefrontal cortex, which can then intervene and take energy away from the amygdala. This can reduce or even stop the “flight-fight” reaction in its tracks. If we make mindfulness a habitual response to stress, then over time, we can learn to consciously calm ourselves down when stress hits.

If we make mindfulness a habitual response to stress, then over time, we can learn to consciously calm ourselves down when stress hits. Click To Tweet

Here is what the research tells us:

In a 2012 study, researchers from Emory and Boston University looked specifically at the effects of mindful meditation training on the amygdala’s response to stimuli. Studies had already shown decreased amygdala response to emotional stimuli in both healthy people and those suffering from social anxiety disorder while they were actively engaged in meditation. These researchers wanted to see if that effect carried through to every day life. The study found that those who were given mindfulness meditation training and who committed to meditate just 20 minutes a day showed reduced reactivity in the amygdala. Researchers explained their findings by improvement in attention skills, which a growing number of studies identify as a result of meditation.

I can tell you from my own experience that a conscious practice of mindfulness works to address the stress that causes a loss of our peace and confidence. It doesn’t even have to be prolonged, seated meditation. I may even leave my eyes open. But the simple act of taking a few moments to focus on my breath and release the tension in my body can be enough to quiet the worry or rumination that, if left unchecked, is bound to put me in a downward spiral.

Mindfulness keeps me in the now, which keeps me anchored to objective reality. I’ve noticed that depression and anxiety often result from going up in my head and predicting a dismal future, as if the outcome I’m imagining is actually certain.

Our worst-case predictions feed the amygdala’s fight-flight reactivity and do nothing to serve our well-being. Thoughts like “things will always be this way,” or “I’ll never get over this,” or “life will never improve,” are patently false. But they can be easy to believe when we’re under a lot of pressure. Mindfulness, on the other hand, puts a stop to this type of thinking and brings us awareness of what is accurate in our now – which is always a mosaic of many things both pleasant and not so pleasant. While mindfulness is not a panacea, it can take the edge off just enough to keep us calmer and more focused when we need it most. This in turn helps us to feel more confident.

Mindfulness is always available, no matter where we are, what we’re doing or what our circumstances may be. It’s the easiest intervention tool we have to help us see through our fears (rational or otherwise) and preoccupations and remain grounded in the present moment, in spite of our challenges.

Here is a guide to the simple mindfulness practice I use 24/7.

Whether you’re already taking antidepressant, attempting to wean yourself off, or simply looking for an alternative or complementary treatment—mindfulness is key to the self-awareness you need to make the choice that is right for you. In fact, when mindfulness is the foundation of the way you live your life, the greater sense of calm and clarity it provides can’t help but be a real game-changer, regardless of the challenges you face.

Activity/Reflection: Think about the last time you found yourself anxious or depressed. Were you ruminating about the past, worried about the future, or a combination? Had you even made up some certainties about your future?

The next time you start to feel this way, make a conscious effort to put your attention on what is actually happening right now. The most reliable way to do this is through focusing on your breath and releasing muscular tension in your body.

When you’re dealing with uncertainty, here are four sentence starters to help keep you grounded in reality. Try using these when things start feeling overwhelming. I know they really help me.

1. Jeffrey R. Lacasse and Jonathan Leo, “Serotonin and Depression: A Disconnect between the Advertisements and the Scientific Literature,” PLoS Med. 392 (2005): https://www.ncbi.nlm.nih.gov/pmc/articles/PMC1277931/

This website uses cookies so that we can provide you with the best user experience possible. Cookie information is stored in your browser and performs functions such as recognising you when you return to our website and helping our team to understand which sections of the website you find most interesting and useful.

Strictly Necessary Cookie should be enabled at all times so that we can save your preferences for cookie settings.

If you disable this cookie, we will not be able to save your preferences. This means that every time you visit this website you will need to enable or disable cookies again.