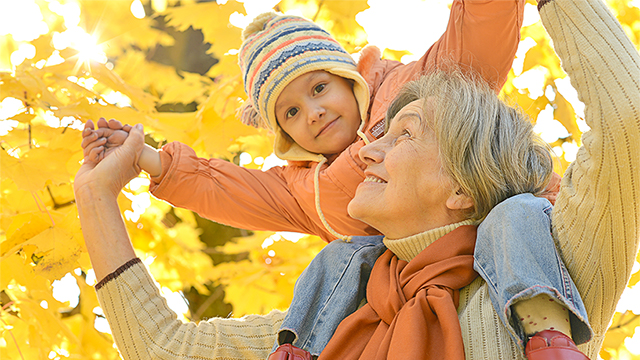 My grandmother was one of the wisest women I’ve known. There was an outing I vividly recall from my childhood that epitomized her mastery at remaining calm and acting with wisdom when she was under pressure. Here is what happened.

As my mother was corralling all eight of us kids into the car, my grandmother’s finger got slammed in the door. No one really noticed until my grandmother calmly asked my mother if there might be a hospital on the way to our destination. And if there was, she thought it would be a very good idea for us to stop there.

Well, the general pandemonium of eight kids and two adults in one car, late to an event, escalated into complete chaos after everyone realized what had happened. Half of us were bawling, one of my sisters vomited at the sight of the blood, and my mother was driving like a bat out of hell, shouting random directives over her shoulder.

Like everyone else, I was caught up in the panic, envisioning the worst. But every time I dared to look at my grandmother, she didn’t look worried or scared at all. She didn’t even seem to be in pain, which was amazing since they literally had to sew the tip of her finger back on when we did get to the hospital. Each time she found me looking at her, she just smiled at me as if to say it was all going to be okay. She remained grounded and calm all the way there.

Conventional wisdom tells us that we get wiser with age, and I often think of this story as an example of this. But is this general assumption about age and wisdom really true?

In his TEDMED talk, psychiatrist Dilip Jeste explains how he came to a similar question about aging and wisdom. He noticed that as his patients aged, they seemed to be experiencing a greater sense of wellbeing even as their physical health declined. Was this the wisdom of aging he’d heard so much about? To research that question would first require pinning down a scientific definition of wisdom.

Because of the connection between wisdom and aging Dr. Jeste observed, his hypothesis was that wisdom must be biological. After all, patients with brain injuries to their pre-frontal cortex became impaired in regulating selfish versus pro-social behavior, and those with injuries to the amygdala had difficulty regulating emotions. He therefore concluded wisdom has a biological component.

In medical school, Dr. Jeste was taught that the brain shrinks as it ages because it loses synapses, dendrites and blood vessels, etc. While this is true to some extent, he and his colleagues found that as long as people are active physically, cognitively and socially, their brains continued to evolve in old age by forming new connections to compensate for any degeneration.

Scientists in one functional imaging study found that even though processing speed and memory do decline with age, prefrontal brain activation actually increases. Their theory is the prefrontal cortex provides scaffolding to compensate for other functions that have become limited. Further evidence suggests that exercise and cognitive engagement can strengthen one’s ability to use the prefrontal cortex in this way.

Jeste and his team eventually concluded that while this shift in mental processing can happen, it doesn’t occur naturally, just by aging. Instead, it’s a result of remaining physically active, and having a rich social landscape along with cognitive “exercise” and learning experiences. Thus, the opportunity to grow in wisdom is there for us, supported in part by our brain’s natural aging process.

I work with women who have dealt with chronic, lifelong stress (along with my own experience). It’s become pretty clear to me that stress hormones and patterns of emotional reactivity interfere with ALL brains. So, if we’re dealing with stress while we’re aging, that’s a double whammy. And as women, we often find ourselves with increased pressures such as caring for aging parents, declining health, and strained finances.

If we’re going to give ourselves the best shot at embodying the wisdom we’re capable of, it is so important for us to be proactive about stress in order to keep our brains healthy as we age. In fact, studies conclude that chronic high cortisol, which the body releases as a response to stress, may reduce the brain functions of the elderly and is a major risk factor associated with dementia.

We can dramatically improve our chances of cultivating wisdom if we can tackle the emotional reactivity that keeps our stress levels chronically high. Click To Tweet

So, yes, it would seem that wisdom can come with age, but it is not a given. We can dramatically improve our chances of cultivating wisdom if we can tackle the emotional reactivity that keeps our stress levels chronically high.

Whenever I recall that incident with my grandmother, I’m reminded of this simple truth: when you’re in a crisis situation, and you feel yourself starting to fly off the handle, remaining calm is always possible.

My grandmother definitely knew the score about panic and emotional reactivity. What her behavior modeled for me became a beacon in dark times. In fact, it’s the goal of the Practice for Inner Peace and the foundation of all the work we do here at 1Body.

I’d like you to consider a memory of your own. Maybe it’s from childhood, or something that happened more recently. Can you recall a time when you felt calm while everyone around you was panicking? Do you have any memories, like mine with my grandmother, when you witnessed someone older keeping their cool in a crisis? See if you can recall such a time and use it to help you remember that calm is always possible.

The bottom line is if we focus on remaining calm instead of reacting, we can access our inner wisdom when we need it most.